Queldon is a new energy healing modality I’ve channelled on March 31st, 2010 in Buenos Aires, Argentina.  Just as for Aqualead, channelling Queldon was something that happened in a sudden and unexpected way.  The energy itself, also called 'Queldon', is clearly different from other energies, even from Aqualead..   It stands on its own, as a separate and distinctive form of energy.  In order to practise Queldon, one must receive an attunement from a Queldon Master.  The attunement is permanent, and there are two different levels of Queldon: practitioner and Master. It’s an energy that is not from here and has arrived in our world for a specific purpose.

The purpose of Queldon is to remove mental and emotional blockages and acts directly on the level of consciousness of a person..   Practised only on human beings, the energy is an important tool for breaking unhealthy patterns, attachments, addictions or negative thought patterns and ideas.   The intent is to bring the human mind back to its original state of freedom and self-balance.  Therefore the person becomes more detached, and has a greater sense of personal freedom beyond the concepts of dependency, lack, servitude or necessity.

Being a healing energy, it acts on the subtle plane which cannot be measured, yet it works powerfully at raising the energy vibration and creating a dimensional shift around where it is practised.   Queldon is practised by using certain hand placements (mudras) near the person or remotely at a distance.   This energy stands alone and it is not practised in conjunction with other healing energies or tools such as crystals, symbols, etc..


Because of it etheric and reclusive nature, Queldon is considered slightly more advanced than Aqualead.  The main reason for that is that the energy requires a certain level of understanding that is acquired only through experience with energy work.  The only known energy similar to Queldon would be Aqualead.  Also, in order to learn Queldon, one must have completed Aqualead level II for at least 6 months as a prerequisite.   During this time, the potential Queldon practitioner can practice Aqualead, and has time to acquire the necessary experience and understanding of the energy in order to receive Queldon.   Queldon is focused on the mental process and inner vision of the individual, because the practise of Queldon in more introverted and 'Zen' by comparison to that of Aqualead.

Aqualead is more outgoing, focused on the elements of nature, the environment and living beings in terms of healing and cleansing.   It has a more dynamic, colourful and expressive personality.  This is how Queldon completes Aqualead’s energy work, by focusing on the human mind and consciousness while Aqualead acts on the natural world, negative energies and the problems of the world in general.

Practising Queldon is difficult to outline because the energy has such a strong presence around the practitioners and Masters.   It acts alone as a ‘master’ and its presence is so strongly felt that is almost feels like a sentient being.  It appears and manifests when needed, and may also act and intervene without being invoked consciously.  The energy has a very high energy vibration, yet prefers to stand back until it feels it has room or the necessity to do its work.   Queldon works wonderfully with personal and relationship issues.  It is also great at working with negative ‘mass’ mind control, delusional or fanatical ideas, and violent patterns.   It brings a sense of inner peace, stillness and clarity.

The practise of Queldon often entails slowing down, and taking a step back from the hustle of modern life. It teaches us to stop and look around us, and ponder.   The best way to become acquainted with Queldon is to begin practising it alone with oneself, and to listen to the energy, or the vastness and silence it exposes us to.    Hence, Queldon is an important tool to work with in a ‘corporate world’ such as ours.  North America or ‘corporate America’ will greatly benefit from this energy as it enables one to detach themselves from the materialistic view of the world.   Perhaps Queldon will help our society be less focused on consumption, speed and convenience, and reconnect us to the basic things that truly matter, such as clean water, trees and fresh air.  Its high energy will also help us reconnect with the natural world and acknowledge the ‘sacredness’ of nature and the animal kingdom.   Through this process, we become once again sensitized and awakened to the simplicity of nature.   This is part of the reason why Queldon is considered an elemental energy and can indirectly assist in environmental issues.  By elevating our consciousness to a more universal and cosmic level, we become less centered on ourselves and more able to see the bigger picture of things.

The practise of Queldon itself feels like a deep meditation, where the focus is centered on our mental and emotional state.  Since there are no symbols in Queldon, we pay direct attention to the energy’s high vibration and presence.   The frequency of practice depends on each practitioner, as the energy will guide people in different ways.  For instance, the energy may not be practised for a year and suddenly reappear when it is timely. This is why a greater understanding of the energy is required, so one doesn’t stick to rigid routines in their practise.

Queldon is a challenging new energy that delivers a powerful message. The first lesson is to never take anything for granted; next, is to not assume that where you currently stand dictates your entire trajectory in life...  It is often just a transition.


Note: Queldon s not taught remotely at a distance.

www.facebook.com/queldon
Posted by Sabine at 3:27 PM No comments:

www.facebook.com/queldon
Posted by Sabine at 3:26 PM No comments: 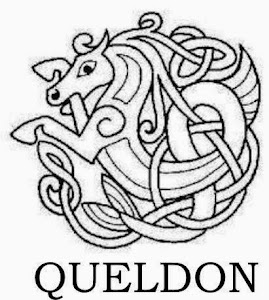 
Queldon is an Elvish energy.
Its purpose is to accelerate humanity's evolution on
Earth.
Queldon acts on the human mind, heart, nervous system and elevates consciousness as a whole.

Like Aqualead, Queldon is FREE OF CHARGE and remains strictly non-profit. Voluntary donations are accepted.

Sabine
I am a Pagan, and the founder of Aqualead and various systems of magic. I channelled this energy in Buenos Aires, Argentina on August 30th, 2008. Visit www.aqualeadinstitute.org for more information. I am developing a new system of magic, called RISTERI magic. There is a group on Facebook. Some of these types of magic include Lanterum and Emergentus. Other projects: I founded Silgerond Press in August 2013, in order to self-publish my own books. 'The Story of Aqualead: A New Healing Energy for a New Earth' is my new book. Berenmil Crafts: Books, card sets, wands and magical gifts. Follow on Facebook.